US President, Joe Biden fumbled during a press conference at the G-7 summit on Sunday, June 13, mixing up “Libya” for “Syria” – not once, but three times – while discussing humanitarian aid to countries torn apart by civil war.

Biden, who is gaffe-prone, was discussing working with Russia in providing “vital assistance” to “Libya” – a “population that’s in real trouble.”

He then said that Russia had bitten off more than it can chew with its intervention in “Syria,” but then added “Libya” to the mix.

“As long as they’re there without the ability to bring about some order in the region, you can’t do that very well without providing for the basic economic needs of people,” Biden said.

“So, I’m hopeful that we can find an accommodation where we can save the lives of people in, for example, in Libya.”

See the video below

Biden’s aides later brushed off the gaffe, saying that he had meant to say Syria instead of Libya.

Despite defence by Biden’s team, social media users were quick to attack the president, suggesting he had early stage dementia.

“I need the #Media to come in, #translate, and tell us wat #JoeBiden the #President is really saying here,” wrote one Twitter user.

“I guess when you’re bombing so many countries at once, it’s hard to keep up,” wrote Lebanese geopolitical commentator Sarah Abdallah. 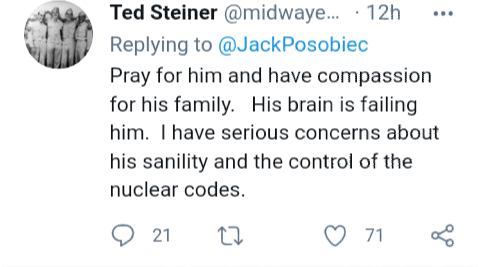 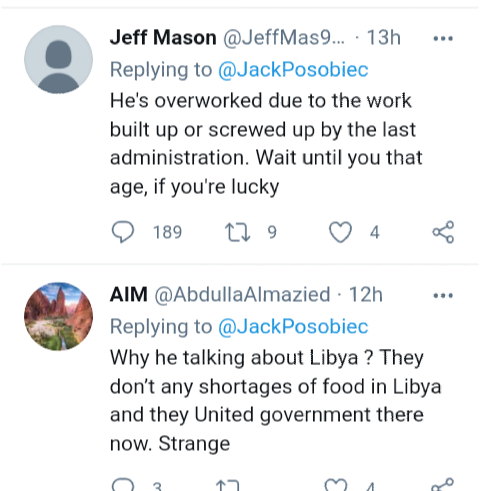 Rumors of cognitive decline have dogged Biden from the moment he announced his candidacy for the White House in 2019. Since he took office, multiple incidents of the president forgetting the names of his own officials and losing his train of thought mid-sentence at press conferences have only intensified the speculation. 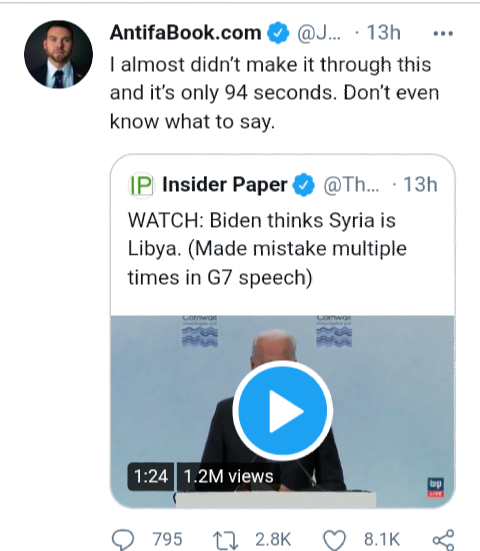 The mix-up came on the last day of the annual G-7 summit in Cornwall, in the southeast of England.

“Let’s Build A New Nigeria That Works For EVERYONE!” – Bukola Saraki Declares Intention To Run for President In 2023

Former Senate President Bukola Saraki has revealed his Intention to run for President in 2023. This comes as former National Leader

Bitcoin Climbs Into Positive Territory After Falling Below $33,000 To A New Low

Bitcoin bounced into positive territory Monday after initially continuing its slide from last week. On Monday, bitcoin fell to $32,982.11, its lowest